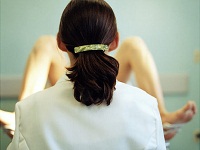 The Pap smear test is a screening test used in gynecology to detect cancerous processes in the ectocervix. Significant changes can be treated, thus preventing cervical cancer.

In taking a Pap smear, a speculum is used to gather cells from the outer opening of the cervix, the uterus and the endocervix. The cells are examined under a microscope to look for abnormalities. The test aims to detect potentially pre-cancerous changes, which are usually caused by sexually transmitted human papillomaviruses. The test remains an effective, widely used method for early detection of pre-cancer and cervical cancer. The test may also detect infections and abnormalities in the endocervix and endometrium.

Doctor Govender performs the procedure and recommends that females between the ages 18 to 65, who have sex regulary perform Pap smear testing. If results are abnormal, and depending on the nature of the abnormality, the test may need to be repeated in six to twelve months. If the abnormality requires closer scrutiny, the patient may be referred for detailed inspection of the cervix by colposcopy.